Jim Cooke is Musical Director of OMS and conductor of the orchestra. He was born in Sheffield, but has lived in Lancashire since the age of 10. He began conducting in 1978 while at college in Liverpool, rehearsing the wind band and later forming a student orchestra to perform concerts of light music, thus developing a very broad ranging interest in repertory.

He gained a diploma in composition from the Guildhall School of Music in 1979, studied for his PGCE at Didsbury College of Education and an MA at Liverpool Hope University. He conducts the Orchestra of Ormskirk Music Society (since 1992), and Manchester Bach Choir (since 2009)
He is also an honorary member of the Royal Liverpool Philharmonic Society, having sung bass in the Royal Liverpool Philharmonic Choir since 1988.

Jim is a member of the Light Music Society, The British Music Society and Lakeland Composers. Two of his pieces have been recorded for commercial CDs: Concert Jig, on Dutton Laboratories British Light Music Premieres Volume 4, and When It’s Christmas Time Once More, on the Royal Liverpool Philharmonic’s Spirit of Christmas”. 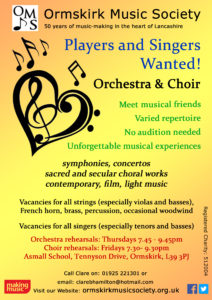