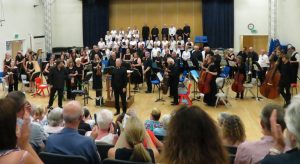 Ormskirk Music Society Celebrate 100 years since the end of WW1

In June the Ormskirk Music Society held their summer concert celebrating French and British music for the Centenary of the end of World War One. I thought this was a unique way of celebrating the centenary of the armistice, with a variety of different pieces – many of which I was unfamiliar with.

The first half featured French pieces from around the turn of the 20th Century. “The Overture to the Opera Mignon”, composed by Ambroise Thomas, is today one of the least known of the major 19th Century composers, however his opera, Mignon, was one of the most popular of the late 19th Century, and in 1894 Thomas became the first composer to be awarded France’s Grand Croix of the Legion of Honour. The overture was a great way to start the concert as we were able to see a variety of different instruments playing a piece with varying different moods. The other French pieces included “Pavane pour une Infante Defunte” (Ravel), “Panis Angelicus” (Caplet), “Cantique de Jean Racine” (Faure) and “Concertino for Flute and Orchestra in D major op.107” (Chaminade.) The flute concertino was my favourite piece in this half and featured a brilliant performance from the flautist, Helena Cooke, who played with so much passion and emotion.

The second half featured a variety of British composers. The first two pieces, “A Shropshire Lad” and “The Banks of Green Willow” were written by composer George Butterworth who was shot in a trench in 1916. He was described by Brigadier Cross as “a brilliant musician in times of peace, and an equally brilliant soldier in times of stress.” It reminded me of the vast amount of talented musicians and artists who lost their lives during the war, and could have gone on to create many more beautiful things. The next piece of this half, “The Great War – Revue-style medley” (arr. & orch. By Jim Cooke), fully utilised the choir. We heard about the relationship between the men fighting at war and the women back home with a narrative split, and it was an emotional tribute to those who gave their lives as well as those who lost their loved ones.

Another piece I really enjoyed was the “Serenade for Guitar and Strings op. 50” by Malcolm Arnold. The guitar part, played exceptionally by Jerome Ness, was great at leading the piece and provided a different tone to most of the other arrangements on the night. The concert ended with “Eight English Dances” by Malcolm Arnold which was an uplifting finale. The pieces were played sequentially and I was told that traditionally the audience do not clap until the final dance has finished, because clapping in between pieces breaks the flow.

The evening reminded me how important it is to support independent music groups like this. It was very clear that all the members had worked incredibly hard on their performance and all their dedication definitely paid off. Not only are the musicians very talented, but they are playing for the admirable reason that they love it. It’s satisfying to see the enthusiasm of musicians who are so passionate about performing together. This was a very interesting and enjoyable concert and it was great to see so many different talents participate together in celebration. The concert made me want to listen to more classical music from this period and learn to appreciate the style more.

If you are interested in joining the Ormskirk Music Society, they are currently inviting new members to come and attend an open rehearsal. Catherine Ness, who organises publicity in the society, says: “OMS is encouraging singers and players to come along to one of our open rehearsals starting in September, preparing for our Autumn Concert on November 17th, where the orchestra and choir will perform a programme including Beethoven’s First Piano Concerto, with soloist Tom Kimmance, Schubert’s Symphony No. 2, and Mendelssohn’s Hear My Prayer. For more details, visit our website: www.ormskirkmusicsociety.org.uk”

John Reynolds is a 19 year old student at the University of Liverpool, studying history: “I have been interested in music for my whole life and I play the guitar and saxophone. I also write theatre reviews and other culture articles for the Ellipsis Student Magazine.”