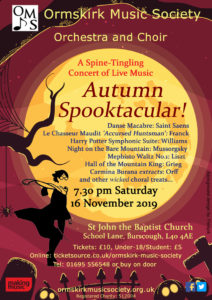 Thrills, fantasy and musical storytelling will be on offer in a programme set to include Saint-Saens’ famous Danse Macabre, Mussorgsky’s Night on the Bare Mountain, and John Williams’ Harry Potter Symphonic Suite, a medley of themes from the cinematic smash-hit: Harry Potter and the Philospher’s Stone.

The evocative storytelling continues with the orchestra’s performance of César Franck’s symphonic poem Le Chasseur Maudit – the accursed huntsman, who is condemned to be eternally pursued for setting out to hunt on a Sunday, as the church bells called him to worship. Liszt’s Mephisto Waltz similarly tells a tale, this time of Faust stopping at a village inn and dancing wildly with a beautiful girl as Mephistopheles himself plays the fiddle.

The choir will be joining the orchestra for Grieg’s ever-popular Hall of the Mountain King, depicting a scene from the tale of Peer Gynt, a young man thwarted in love, who runs off to the mountains only to be captured by trolls and taken to see the Mountain King. The choir will also be performing the Evening Prayer from Humperdinck’s Hansel and Gretel, selected extracts from Carl Orff’s Carmina Burana, and several other wicked choral treats!

The orchestra also presents the premiere of a new work Mischief and Magic by young composer, Gabriel Ness.

This is certainly an event not to be missed, showcasing music that stirs the imagination, thrills and delights at every turn.  Something, we hope, to brighten up the dark November nights.

Tickets are available in advance from ticketsource.co.uk/ormskirk-music-society, from Catherine Ness (01695 556548 or catherine.oms@btinternet.com) on the door priced at £10, £5 for children.