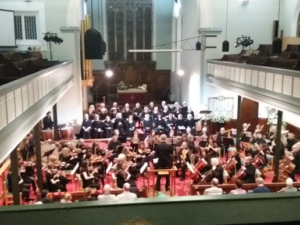 On Saturday 16th November I had the pleasure of watching Ormskirk Music Society’s “Autumn Spooktacular” show which featured a range of different pieces of music, relating to autumn and Halloween, performed by their choir and orchestra.

Opening the first half was Modest Mussorgsky’s “Night on the Bare Mountain” which tells the story of a witches’ sabbath. The piece had a very dramatic opening which gave us a vivid introduction to the witches. Suspense was created throughout thanks to the chilling combination of the flutes and the strings, which gradually built throughout until the triumphant horns. The orchestra performed the Rimsky Korsakov version which had a more peaceful ending than the original. I really enjoyed this piece and thought it was a good opener to the concert.

After this was “O Fortuna” from “Carmina Burana” which was recognisable to me within seconds, having featured in plenty of films, TV Shows and adverts. The “implacable hand of fate” can be heard with how the piece changes its narrative between calm and shocking throughout. The drums kept the piece at an always anxious pace and the choir did a great job at bringing the haunting vocals to life.

Next was the “Danse Macabre” which is one of my favourite pieces to music as I have fond memories of dancing to it in several shows dressed as a skeleton. It was fascinating seeing it live because the calm and tranquil opening deceives the audience for the horrors that lie ahead. The violin parts were played flawlessly and this helped me to imagine the skeletons taking part in the dance. The drums allowed me to imagine the skeletons’ feet hitting the floor in time to the music. I found it fun to use my imagination to picture the terrors of what was going on.

Next was “Choeur d’Ombres” from “Lelio, or “The Return to Life” which is a controversial and rarely played piece. Once I realised the story I found it easy to imagine what was happening; I could picture a man failing to recover from the dark nightmare he’s just had. The piece started off strangely beautiful but became gradually more horrifying with the hypnotic blend between the choir’s unnerving sudden chord changes and the simple, but haunting, accompaniment the piano plays. I thought there was something so chilling about hearing so many voices singing at such a high octave and so mysteriously. I could tell they clearly loved learning this one.

Finishing off the first half was “Evening Prayer” from Hansel and Gretel, which was an unsettling take on the classic fairy tale, and the “Mephisto Waltz No. 1” by Franz Liszt. I really enjoyed the use of strings and woodwind in these pieces and I felt like both were anxiety-inducing in their own unique ways. Particularly in “Mephisto” I loved the dreamlike quality of the flutes and how the instruments imitated each other.

The second half started with one of the most recognisable pieces of music, “In The Hall of the Mountain King” which was a great opportunity for all of the instruments to shine. I hadn’t seen it performed live before but it was entertaining seeing all the musicians working so hard at such an incredible pace – I felt like this added to my enjoyment.

Next was a re-imagining of the classic love song “Bewitched” as a jazz waltz with, to quote the programme, “more than a little humour along the way”. This included some audience participation where the conductor invited audience members to tap coins to imitate the sound of tap dancing; I would have joined in had it not been for me scribbling down notes like a first-year student in an induction lecture. Although I found this version to be a little bit bizarre it was also strangely heartwarming because I could tell that the choir (accompanied only by the piano) enjoyed singing this so much,

Next came “Transylvania Mania” from the musical “Young Frankenstein”, based off the classic film, and being a big Mel Brooks fan reminded me that I needed to watch the film. It was funny how the conductor turned round and started singing a solo at the very start – from that moment I knew what sort of piece it was going to be, setting a very different – more light-hearted – tone for the second half. The delivery of the tongue-in-cheek lyrics was very funny and made me want to check out the musical.

After this was Cesar Franck’s “Le Chasseur Maudit” which was one of my favourite pieces of the night. The hunting horn at the start set the tone for what was to come and I felt like this helped me to imagine the huntsmen preparing for the chase. To me, this piece seemed a lot about wisdom and trusting the elders. For example, if the protagonist had listened to them then he wouldn’t have become trapped in the fire. This performance truly felt epic and gave me the sensation as if I was joining the chase on their expedition. Like most epic pieces, this also had its turning point – when the protagonist increasingly started to realise the hunt was a bad idea as those once triumphant horns had turned on them and now represented the danger they must face. I could definitely hear the fantasy elements present and I was reminded of the music from films such as The Lord of the Rings or Braveheart. The four movement structure made me feel like this was a story and the orchestra played it so well with so much heart and expression, The piece, to me, seemed challenging but the quality remained consistent throughout. At times I found it hard to keep up with which section we were up to but I believe part of the beauty of the piece lies in allowing them to blend and develop each section so it flows as one chaotic story.

The next piece was a cover of Credence Clearwater Revival’s classic rock song “Bad Moon Rising” which I certainly didn’t expect the orchestra to sing after hearing some of their frightening pieces in the first half, but I really enjoyed it. Whenever I hear CCR songs I’m immediately taken back to when I studied the Vietnam War in high school, about five years ago, so this song means a lot to me. Once again, the audience were invited to help emulate the sound of rain by tapping their fingers on their palms, and some people were given rainmaker instruments to play along with. One thing I love about this song is the juxtaposition between the lively tune and the haunting lyrics, and this rain effect only made the piece more atmospheric and shocking. I thought hearing the piece from a group of people also gave the song a darker, apocalyptic meaning. They managed to strip away the “fun” from the song and give us a version that felt prophetic considering the current climate we live in.

Next was “Double Trouble” from Harry Potter. Even though I consider myself to be a massive film fan, I have notoriously not seen all of the Harry Potter films which means I’ve been the subject to much (well-deserved?) criticism at the expense of my ignorance of the series. However I thought this song was a blast. I thought the harpsichord was really fun and different, although I couldn’t hear the choir as loudly for this one as I would’ve liked, although that could just be down to me sitting next to one of the main speakers on the balcony. The choir did a good job at making it sound spooky and I thought the abrupt ending was very comical. 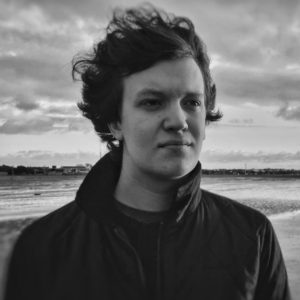 The penultimate piece was the one I’d come to see: the debut performance of “Mischief and Magic” which was written by my very good friend Gabriel Ness who is currently studying film composition at Leeds College of Music. I’m glad they saved this piece to the end because that made it feel like the “main event” before the finale. I’m a big fan of Gabriel’s piece as I can imagine the various types of “magic” being performed throughout. I think it’s quite fun imagining all the creatures and characters who could be accompanying the piece. Some of the notes are played off the beat which makes it entertaining and different and I especially loved the use of the piccolo which reminded me of the unpredictable and chaotic nature of magic. His influences are clear (including some of the pieces he performed with the orchestra such as the Harry Potter suite and The Hall of the Mountain King) yet this piece feels so original and Gabriel is clearly forming his own unique style. It’s safe to say the performance was a huge success and was rewarded with the loudest applause of the night and a well-deserved bottle of wine. It really does take some talent to be able to write for an orchestra at such a young age, and I’d actually use the word “magical” to describe how it felt seeing Gabriel’s piece being performed live by an orchestra for the first time. I know this won’t be the last time we hear a Gabriel Ness piece performed live. You can listen to “Mischief and Magic” by clicking here.

Gabriel was also inspired by “The Sorcerers Apprentice” and various horror tracks, which he said helped him craft the “spooky vibe” for “Mischief and Magic”. Unlike many top film composers nowadays (such as Hans Zimmer or Jonny Greenwood) Gabriel focuses a lot on the melody and creating something memorable.

“I am very determined to ingrain that melody in the audience’s mind. The main theme of the piece is repeated throughout the entire orchestration. I use different variations, such as different keys, that all come together at the end of the full tutti section (orchestration). All the instruments are playing either the melody or the accompaniment. I’m quite eager to make an ample melody.

“I was there for the first rehearsal for it. Obviously in the rehearsals they didn’t have all the instruments involved and in that piece one of the key parts is the bass instruments so for the majority of rehearsals everyone was on the off-beat which grounded the piece. I did come along to the second rehearsal and, despite it not being the full orchestration, it was a really surreal moment just listening to my music; hearing how much different it sounded and how much more shape it’s got compared to sample libraries. I’ve worked quite a lot with computer music and sample libraries and I’m always working on trying to make that sound as realistic as possible. I’m always trying to remember how important it is to keep orchestras in the music scene and there is no way they can just be replaced by sample libraries because they never get given that chance that they’ll get given in a live performance. That was just what made the piece – it just felt so much more organic. It was the excitement and the enthusiasm of what the instrumentalists gave which is what brought the piece to life. They put all their effort into playing that piece and it came out brilliantly.”

The finale was the Harry Potter suite: a melody of tunes written by John Williams which started with the iconic Hedwig Theme and featured some pieces that I was unfamiliar with. As I’m not a Potter fan I’m not an expert on the score but it sounded like we heard a good range of different pieces of music from the films, which the whole orchestra seemed to love playing.

I had a really good time at the Ormskirk Music Society’s “Autumn Spooktacular” and cannot wait to see their next concert. There is something remarkable about seeing a live orchestra come together and play a great variety of pieces that I really wish there were more opportunities to see. Support your local orchestras!